The Turpin children had a police dog when facing their parents in court. He’s comforted them for months. 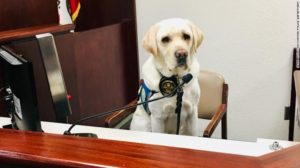 As the children of David and Louise Turpin spoke about taking their life back and the nightmares they still have, a yellow Labrador sat quietly next to them.

The dog, Raider, has been meeting with the siblings ever since their parents were arrested early last year and their lives were turned upside-down.  One of the 13 children – who ranged in age from 2 to 29 – managed to escape their filthy home in Perris, California, and called police.  Authorities said the siblings had been isolated from the outside world and ere often denied showers, medical care and food.

The Turpin children have been able to play with Raider numerous times as they navigated courthouses, prosecutors’ offices and other legal settings in the past year.

“When we see him bring a smile to someone’s face or even just touching him, we know that they are getting emotions out that maybe a human wouldn’t be able to do,” said Corona Police Sgt. Adam Roulston, one of raider’s handlers.